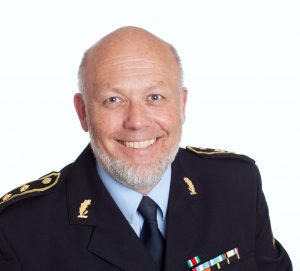 led ICT4COP’s Work Package 4: Police Training and Education from 2015 – 2017, overseeing a number of the work package’s deliverables. He was active during the project application phase and was responsible for establishing and running the Police Experts Network (PEN).

Tor Damkaas; retired Police Superintendent at Norwegian Police University College, Oslo, Post  Graduate  Studies, responsible for International Civil Circes Management  Training: During his 45 years long career he mostly served in different rural areas on community oriented policing.   Tor Damkaas conducted several international police reform missions, first in Bosnia and Herzegovina as a UN Police Officer in 1997-98.  Next mission was in Sierra Leone in 2002 serving as “Election Expert Police Adviser”.  Tor served twice in Afghanistan, 2005-06; Instructor and Police Advisor under a bi-lateral Norwegian-Afghan project. In 2007 Tor was deployed to Ache province in Indonesia on a Norwegian – Indonesia bi-lateral police advising project on Human Rights.  Tor was back in Afghanistan 2011-12 as a UNPOL Advisor for UNAMA where he was a member of different working groups involved with the Ministry of Interior’s work on re-organizing Afghan National Police. In 2012 he co-edited a “White Paper” on Afghan National Police. In 2015  till late  2016 Tor  was  part  time  deployed  as  police representative from Ministry of  Justice and Security in Norway to a  bilateral mission of Legal Experts to Ukraine. Tor has also participated as a police member to the annual governmental “Norwegian-Indonesia Human Rights Dialogue” delegation three times 2009 -2010 and 2011. Tor Damkaas is a qualified trainer for both the UN Police Officers Course and the UN Gender and Sexual Based Violence course. Tor has conducted several pre-deployment courses (UNPOC) in Norway and abroad. He has also been guest speaker at the NATO School in Oberammergau, Germany. From 2013 till today Tor is a member of the international Management Team responsible for the annual “Senior Strategic Police Advisors Masterclass on Security Sector Reform” conducted at different locations and planned for Germany Police University 2021.